Some people have occasionally thought I was one of those modest, self-defaming cooks because when I cook something ordinary, I do tend to pick apart and question what makes it less than extraordinary.

But actually, I’m just honest, curious and I have high standards.

Case in point– when I cook something mind-blowing, I have no qualms whatsoever about tooting my own horn.

And now I have to tell you about the brownies I made last night.

If you’re like me, and most women and many men, you adore chocolate, and are forever seeking that Ultimate Chocolate Experience. Brownies are my personal preferred experience. In my ongoing recipe book, I have Orgasmically Good Brownies, then Brownies Revisited, then Brownies Perfected, then Perfected again and again. A few weeks ago, I borrowed a friend’s Cooks Illustrated (great type-A cooking rag, if you go for that sort of thing) with a Best Brownie recipe, determined to take my over-the-years-developed-into-a very-great brownie recipe to epic levels. Sadly, when I got it home and compared notes, I found that it was almost identical to my recipe. Validating, but disappointing.

Last night I was infected again, and somehow got the brilliant idea to use some of my kumquat puree in a batch of brownies. I do love chocolate with orange.

Oh my dear sweet jesus, why did it take me so long? It’s not hard to guess that it would taste great, but what I wouldn’t have guessed is how much more chocolatey it would taste. Somehow, unless some other form of alchemy was at play, I swear to god the kumquats literally doubled the chocolateyness of my same old, made dozens of times brownie recipe. Not only were they the best brownies I’ve ever had, I think they might just have been one of the best things I’ve ever eaten, period.

At this point I can’t really put off the kumquat story any longer. I’ve had it on my list of To-Write-Abouts for ages. And now, it’s become urgent.

Way back, months ago, my posts went on a citrus kick. Citrus just happens to be what there is here. The locally available, otherwise wasted fruit. Falling off of landscape trees all over the city. And sometimes straight into my foraging bag.

There were trash bags full of split lemons from the local monastery. A dozen grapefruits blown down into public space by the wind. Bag after bag of Satsuma mandarins brought by a neighbor, made into batch after batch of marmalade as I sought to unlock the orangey flavor I believed could be possible.

Then I found the kumquat tree. In an abandoned lot, therefore truly available without even anything sneaky. I’d never eaten kumquats before. Their knock-ya-flat burst of flavor entranced me. Not so much for eating, although one bite’s kinda fun, but for cooking with. They are so very, very orangey. Much more orangey than an orange. I tried candied kumquats, and at first taste was in love with them. I don’t know if each individual ‘quat tastes different, or if it depends on the mood I’m in, but after that very first one, the rest tasted too bitter, and also, too sweet.

Next I tried pureeing the whole fruits (well, first I cut them in half and removed the seeds) for a potent blend of zest and juice. I froze the puree in 1-2 Tablespoon chunks and started using it for baking. Orange Pound Cake? Yum. Orange Cranberry Muffins? Yum. Orange Cream Scones. Yum! 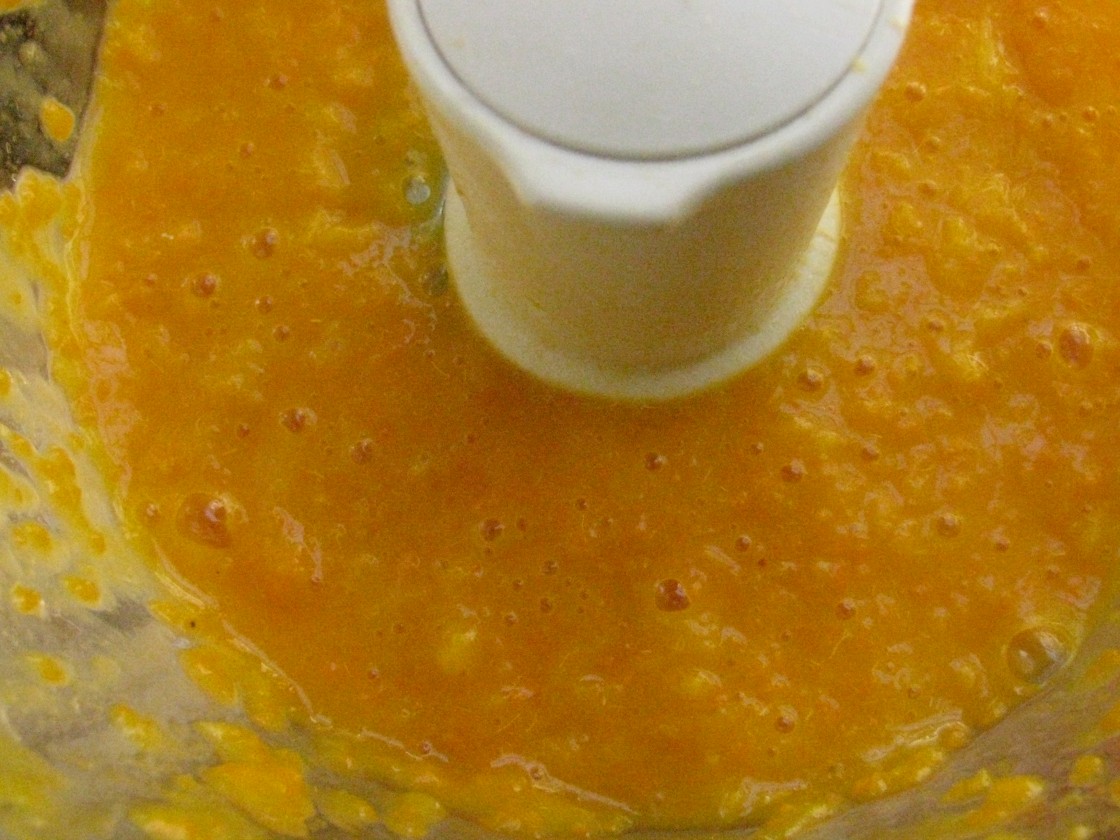 When I used them like this, the bright, full orange flavor was so delicious. Not at all bitter. I had labored over the fact of long boiling with all my marmalade. With herbs, I know that long boiling (called decocting) sends all the delicate essential oils straight up into the atmosphere, and brews out the bitter (often most healing) properties of the plant. If you want medicine, decoct (not always, but usually); if you want delicious tea, infuse. Infusion is just the way we usually make tea– pour boiling water over, let steep. I wondered if I could somehow infuse the kumquats to preserve all those fabulous essential oils and acids that give it the zingy fresh orange flavor.

I tried making a simple sugar syrup, pureeing a big batch of quats and adding them in, then cooking it just the barest bit more, not bringing it back to a boil. Voila! An incredibly orangey syrup. Bright, zingy, sour, sweet, ROWRRR!

I’ve been meaning to try rebatching some of my (many, many jars) of marmalade. Although I don’t mind, and maybe even like the bitter flavor of the ‘decocted’ mandarins, I think it would be far better, more well rounded, with the fresh orangey kumquat flavor mixed in.

In the meantime, I’ve been throwing my frozen puree in lots of things, and loving it every time.

Dense, rich, almost truffle-like, but still most definitely a brownie. A Brownie Really and Truly Perfected.

Since I never make the same recipe exactly the same twice, and I did tweak my regular recipe in a few other ways beyond the kumquats, and who knows which thing resulted in this new divinity, here is the recipe as near to exactly the way I made it.

Oh, by the way. I know most of y’all won’t be making kumquat puree. What the hell is a kumquat some of you have been asking since the title? But I think orange zest, mixed with lemon juice would make a reasonable substitute. The acid from the juice might have been integral to the incredible texture, so don’t leave it out.

So here it is, after much ado, fanfare and wordy introduction

The Best Fucking Brownies Ever

Melt butter in a good sized sauce pan. Whisk in cocoa till smooth, then the citrus. Let sit a moment to steep while you grease your pan. I used a smaller than usual pan, which might have been one of the alchemic elements– it was my little 5×7 pyrex that fits in the toaster oven. Oh, and preheat your oven to 350. Actually, I think my toaster oven runs hot, so I only put it to 325…

Now whisk in the oil, sugar and vanilla and allow to cool a bit while you measure out and whisk together your flours and the soda. Then back to that fragrant goo. Whisk in the egg completely, then fold in the flour and scrape the lot into your pan.

Bake until not quite done. Do not overbake. This is probably the single most important factor to good brownies, and one of the hardest to achieve. Supposedly if you stick a knife in, there should be wet crumbs but no batter. But I’ve found this not very reliable, or just hard to differentiate. If you press the top with your finger it should not feel remotely liquidy, but still… soft. It certainly shouldn’t spring back like a cake. It’s mostly instinctual, and honestly, I’m still cultivating the instinct.

This batch for some reason rose, then fell…? And when Divine Intervention shouted “the brownies!” into my head, making me run for the kitchen, they were perfect. It is possible that the only reason these were the best brownies I’ve ever made is simply because this is the first time I ever took them out at that perfect moment.

So, now. You know my secret. How will I when the recipe contest now?