I found an old cast iron skillet at a junk shop the other day. Brought her home, cleaned her up and seasoned her, and she’s a beaut. It’s inspired me to do a small series on cast iron– how to cook in it, and how to take care of it– so that you never have to buy another damn teflon pan again. Anyone interested?

I am a huge fan of cast iron. I’ve been cooking in it for 15 years. I love the fact of it’s permanence. You can get an old cast iron from your grandmother, and pass it on to your grandchildren. Never worse for wear. I am even fond of it’s heft in a weird way. Cast iron is solid, man. The seasoning may come and go, but the pan itself endures all.

I love the way you don’t have to worry about your cast iron pans. Take care of them, yes. Jealously guard them from well-meaning but ill-informed dinner guests? No. I hate the way teflon encourages stress in the kitchen. My dad always used teflon pans. He was pretty much the only person allowed to use or wash them, and they got stored on a high shelf behind a closed door. After a nice dinner party he’d have to jump up with alarm when someone approached the pile of dirty dishes.

And if you’re not stressed out about your teflon, you should be. Teflon is theoretically safe, so long as it is never heated too hot,  washed with an abrasive scrubbie, or touched by metal of any kind, which will de-laminate the coating. As a side note, if ever you decide your bucket of freshly dug razor clams would be good sauteed with some garlic butter, do not attempt this in your new teflon pan. Ahem. Even well washed clams harbor bits of sand that will rip the shit out of teflon.

So, you’re convinced? Ready to cast off the shaggy teflon nonsense and cast on some cast iron? Alright!

Cast iron skillets can often be found at thrift stores, garage sales, or your grandmother’s basement. They don’t have to look pretty to be good pans. I once recovered a complete rust bucket found in the grass by an old campsite. A little work, as we shall see in the next post, but it resulted in a fabulous pan and a heavy dose of satisfaction. I have a friend who swears she got a “bad” cast iron, that just won’t season, so it’s possible that such a thing exists. So far, I’ve purchased or recovered almost a dozen cast iron pans and haven’t had any bad ones. The brand doesn’t seem to matter. They all work just as well as their seasoning.

New cast iron is actually pretty cheap, compared to other quality kitchen equipment. If you want to buy new, you can probably find a selection at your local grocery or hardware store. Online, Lehman’s Non Electric Supply sells an extensive collection, including my first cast iron, a combination of a 3 quart dutch oven and a lid that is also a shallow skillet on it’s own. I highly recommend this if you’re looking to buy new. It’s a perfect combo. Covers all your bases for only $40. 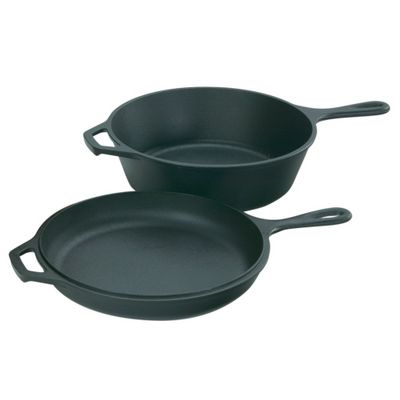 Are you all fired up? Buy, beg, borrow or steal yourself a skillet or two, and follow along with the next two posts:

Cast Iron for the Rest of Us