Mostly I love gardening. I mean, to the bone adore it. But goddamn, it can get disappointing sometimes! Especially here in the swamps, where everything grows like crazy, until you’re practically drooling, and then dies. Mysteriously.

Summer is the off season here. Gardens limp along. Smarter, richer people than me just cover the whole thing up with plastic to keep the weeds back, then get on a plane headed north. But I just had to at least try all those elusive true summer crops that I can’t grow in Alaska. Melons, tomatoes, peppers, beans, cucumbers.

Last year cukes, peppers and beans were stars. No one but me is very keen on peppers in our house, even though the red-ripe homegrowns are so incredible. Cucumbers become pickles which are practically candy as far as the 4yo is concerned. Beans go over well at the dinner table, so I planted about half my summer garden to them. Mostly snap beans– a purple bush and a yellow Romano pole variety that produced like crazy last year. A few rows of limas too.

This is a long way of saying that the beans are all, every single plant resolutely, dying. Tiny, stunted beans all over the succumbing plants. I want to cry. Why? Why? Why me? Have I not put in my years? Have I not said my Hail Marys? Hung my crystals? Consulted the Farmers’ Almanac?

(Oh, right. I didn’t do any of those things, I deserve what may come, heathen of faithlessness.)

That jungle up top looks so promising, right? That was on Saturday, at the beginning of my garden day. As lush as that is, there’s almost no actual food in that photo.

The tomatoes were not a surprise, they’re hard around here even for the non-organic growers. I was judicious at least, with their planting. Only 8 plants. Consider my restraint! Four of those withered and died without giving so much as a single ripe tomato. The plants are long gone.

The melon story, you’ve heard. Since that anti-climactic harvest the plants and the one ripening melon left completely died, rotted, and dehydrated within a single week.

I got a decent wave of cucumbers, enough for five jars of pickles, before those plants bit the big one, months ago.

On a more productive note, I have a long Italian red pepper pumping ’em out as fast as I can figure out how to disguise them into dinner. The eggplants are coming on too, just as I realize that, yet again, I’m the only person who eats eggplant in this house. Five plants? Umm, who planned this garden?

The problem is, you can’t grow the things my family does like in the hot New Orleans summer. No brassicas whatsoever, carrots, potatoes, beets, peas, spinach, all long gone around here. Even the chard gave up the ghost. And of the summer crops, the only one that really gets some love at our table are snap beans.

And here we are full circle, back at the bean issue.

Reading all of y’alls green sprouting luscious garden posts is making me righteously jealous. But then, I must remember, there are 3 growing seasons in a year here. This is the icky one, the might as well give up one. I should consider this winter, really. Then my Alaskan soul would pine appropriately for spring, which happens to come in late October. And, lucky me, I will get two lovely growing seasons before the ick comes back around. 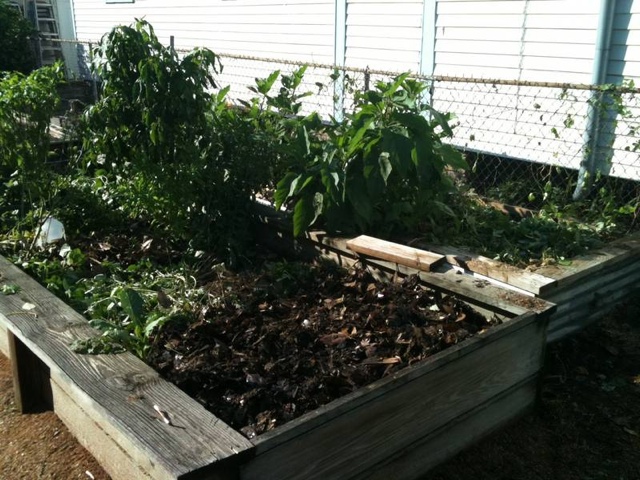 5 thoughts on “I Love/Hate Gardening”