Most modern people think cooking dinner starts with deciding what they feel like eating. Some of us more pragmatic cooks think first about what’s in the fridge, then about what we could do with it. But there is yet another level, which I often find myself on, where the question of dinner is secondary altogether to the pressing concern of using up the food I’ve procured. Have you ever felt that way? I almost find it difficult to leave for the weekend because, like a pet that needs daily care, my food store is a Jenga-like construction of meals on their way. I can’t go camping this weekend, there’s a big pile of red peppers in there waiting to be roasted! I have meat thawed for a roast. The leftover garlic yogurt sauce needs falafel. What would happen without me?

Having a garden really brings the use-it-up struggle to a fine fervor. I don’t buy very many vegetables, and since my crops are heavily seasonal and furthermore a mix of pass and fail, I often only have two or three options at a time. Right now I have peppers and eggplant. Every meal is a question of how I can use up some more peppers and eggplant (made especially difficult since no one else in my family really likes either…)

Back home in Alaska, we only had one growing season– summer– and it only accommodated what here in New Orleans are “winter crops.” Kale, carrots, cabbage, kale, peas, chard, leeks, more kale. Every meal, how to use some kale. But also, more importantly even, the wild foods. Salmon, deer, black bear. Nettles, blueberries, cranberries, salmonberries. How to use them up. I spent a lot of years learning the answers, and really my whole way of cooking was based on those ingredients. Not that I didn’t have a whole pantry full of “regular” stuff like pasta, beans and oats. But the point was always to use as much wild and garden food as possible. Those were my focal points.

When I first discovered my love of Mediterranean Arabic food (one night at a Moroccan restaurant in Portland changed my life) it seemed so exotic. Such a far stray from my local food ways. I used to cook these enormous 8-course Moroccan meals for my birthday, spending $150-200 on ingredients. Whole cardamom, pomegranate molasses, orange blossom water. Pistachio oil to drizzle on a pate of roasted eggplant and ground walnuts. Mmmm, I swoon just naming them. All resolutely un-Alaskan ingredients, not pantry cooking.

I’m not sure when it happened but at some point I realized that I was just adventuring in someone else’s use-it-up food culture. Pomegranate molasses is the outcome of a shit ton of pomegranates. Roasted eggplant pate is what you make when you’ve got more eggplant than you know what to do with. And then I had the real epiphany. I consistently substituted wild game for beef or chicken in these recipes, thinking I was perverting them. But then I realized that the original recipes were often for wild game, and then converted to commercially available meat for American households. Even recipes for “lamb” were probably originally mutton (full grown sheep) and much closer to wild meat than beef.

The realization snowballed when I inter-library loaned Paula Wolfert’s Mediterranean Grains and Greens this spring. I adore her work, and this is an almost archival book that I hope to someday own (it’s got a cultish following, so it’s pretty pricey). As implied by the title, it’s half about greens. All kinds of greens, and all kinds of traditional recipes for them. She gives modern world substitutions (chard, endive, beet greens, etc) but the original recipes are based on mostly wild greens. Which are apparently the traditional greens of the Mediterranean. Nettles figure big. Also purslane, dandelion, and lots of green herbs. It struck me as funny realizing that when my friends and I made ‘nettle-kopita’ back in Alaska, we were quite a lot more on target than we could have imagined.

The subject of traditional cultures, what foods they harvested and how they cooked them is endlessly fascinating to me. Back at 17, when I was considering whether to go to college, ethnobotany and culinary anthropology were top on my list of ‘fields.’ In the end I decided to save my money, and I’m glad I did. I spent a lot of time traveling the world instead of studying textbooks, divining my own ethnobotanical cooking methods instead of taking tests. For myself anyway, a much better education.

Lately I’ve been running the subject through my fingers again as I consider this new culinary climate. In some ways it’s like starting over, but really, the principles of cooking with what you’ve got are universal. Stay loose, think creatively, abolish taboos.

Yesterday, with a big bag of eggplant weighing on my mind, I approached the subject of dinner. I looked online to see if I could find Paula Wolfert’s recipe for the roasted eggplant and walnut pate that so blew my mind years ago. Amazingly I did find it, pirated out of The Slow Mediterranean Kitchen, one of the most beautiful cookbooks I’ve ever seen. I scribbled out the recipe, and then sighed, wondering how I could possibly call eggplant pate ‘dinner’ to my particular audience. The ricotta in the recipe must have been the key to my brilliance. Suddenly I realized its similarity to pureed eggplant, abandoned the pate and jumped straight to… lasagna!

Could I mash up the eggplant and use it in place of ricotta? Could I possibly get away with such heresy? The quick answer is yes. 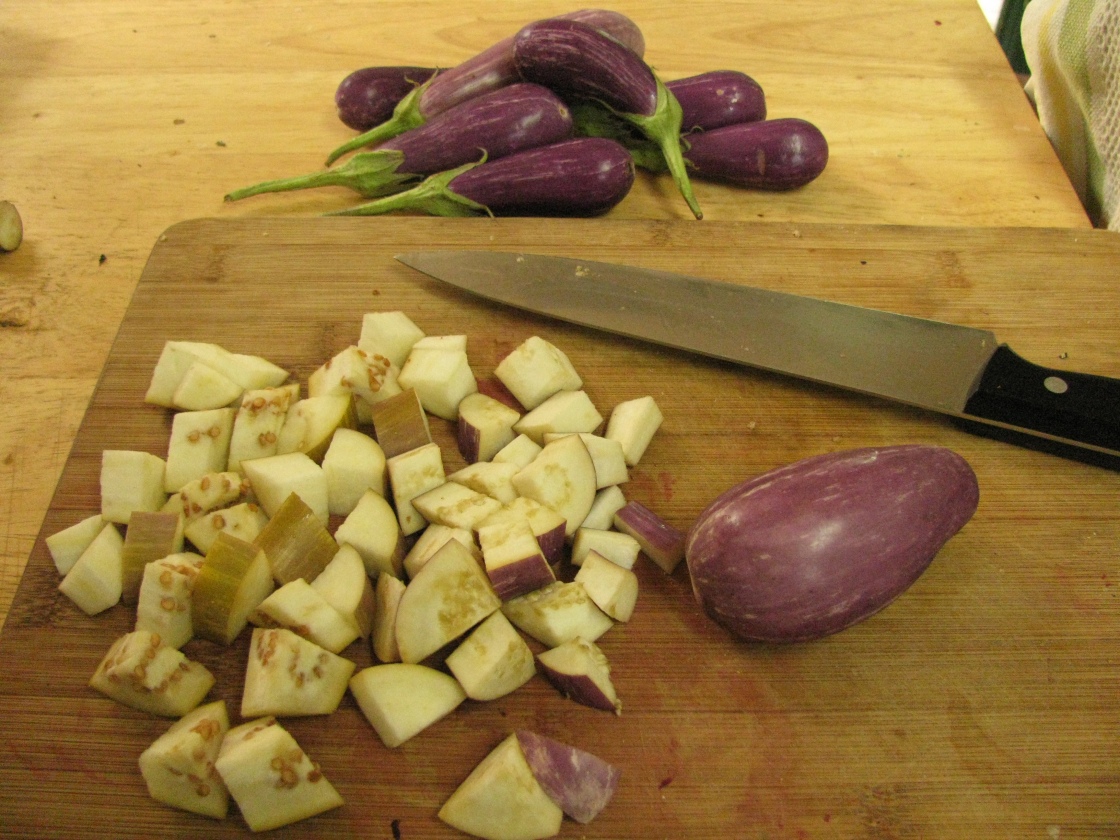 It worked beautifully. I cut the eggplants into small chunks and sautéed slowly in plenty of olive oil. I mean plenty, you know how eggplant can suck it up. More fat the better, I always say. Especially when you’re trying to disguise a vegetable as a cheese! When the eggplant was about half done, I threw some onion in there, and a little green pepper. Once completely soft, I let it cool a bit, then pureed roughly. I was going to just mash it with a fork, but the peels were still too prominent, so out came the stick blender I bought just for soap making and now wouldn’t want to live without. To the puree I added a little heavy cream, not much, a few tablespoons maybe, an egg, plenty of salt (cheese is salty) and 1/4 cup of leftover yogurt-garlic-mint sauce. Surprised yet?

Lastly I mixed in some thawed collards (squeezed and chopped fine), and layered it with mozzarella, lasagna noodles and tomato sauce. Divine! And need I say, it went over much better at the dinner table than the aforementioned pate would have.

As I said in that last garden post, my harvests are mostly over till November, at the earliest. But, whether you base your meals on a constant garden supply, what’s in season at the farmer’s market, or just whatever is cheapest at the grocery store, the principles of cooking with what you’ve got are the same. Don’t start dinner by wondering what you feel like eating, start by looking around to see what needs using.

You are just the conduit through which the foods of your world are transformed into the meals for your family. First start lookin’ and then start cookin!

Need more ideas for over-exuberant garden goods? Try How to Hide, Err, Eat Eggplant all of which I think would work equally well with that dreaded August zucchini glut.