For all my moaning about New Orleans, I spent an hour the other day planting carrot seeds in my shirtsleeves. In January. I harvested the last stragglers of green beans and eggplant and a bumper crop of red Marconi peppers, in January! Not to mention crisp red potatoes, a giant head of broccoli– the likes of which I have never harvested before– as well as beets, cabbage, collards and chard. In January!!!

Meanwhile our picturesque hometown of Cordova, Alaska has called in the National Guard to help shovel an historic dump of snow. There has been a total of 18 feet of snow so far this winter, most of it in the last few weeks. Roofs are caving all over town, there is a help hotline for folks who’ve become trapped in their house by snow. Many buildings have been deemed structurally unsafe and they set up a shelter at the rec center, but apparently there’s no one there. Everyone’s got friends to stay with. As My Man said, “You gotta love a town with no homeless.” Not even in a state of emergency.

I felt pointedly guilty as our tenants back home spent day after day shoveling to keep the driveway and path to the fuel tank clear, and to keep drifts back from the windows so they don’t get broken (it happens), and report for duty to this call,

while I played in the warm dirt at my community garden bed, dreaming of the spring crop of spinach I will likely be eating by the end of February.

But, lord knows, I needed that garden day. What glory to play in the dirt, what pure wholesome pleasure! I dug and fertilized, crumbled and smoothed. Planted about half my spring crops.

I had been feeling really sad about missing the fall planting window, which fell right during our cancer scare. But I am realizing how good my garden looks anyway, crops ready to harvest, crops growing for later, and bare space ready to fill for spring. It’s just about perfect really. I missed a few specific things, like fall spinach and carrots, but there’s plenty of greens and peppers.

Despite having never in my life managed to follow a garden plan, there always seems to be plenty to eat if I just shift my palate to whatever I’ve got. Which is good advice for life too I guess. Make an effort to do what you love, and then make an effort to love whatever it is that you get. 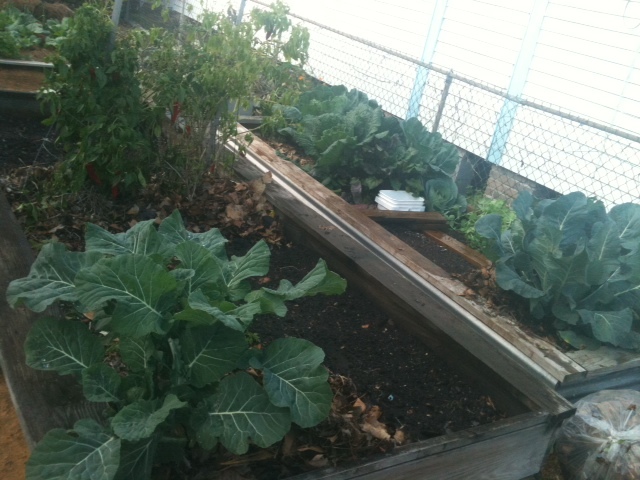 5 thoughts on “Planting Carrots in January”