The good news: It worked! I gelled a batch of marmalade!

The bad news: I have no idea why it worked.

I did put the seeds in a little cheesecloth baggie, and boiled with the rest, as some recipes suggested. But there weren’t very many seeds, I can’t imagine it was that. I also let the boiled till tender peels and everything (pre-sugar adding) sit overnight to “develop” the pectin, as some other recipes suggested. Was that it? Or was it that I made a smaller batch? One recipe did say it was hard to get a big batch to reach temperature…

Whatever it was, I sure was excited when the roiling, boiling mass of orangey goodeness started to look right. And just so’s you know, even on a plate that had been in the freezer, a dab still looked a little too soft when it was, in fact, ready. 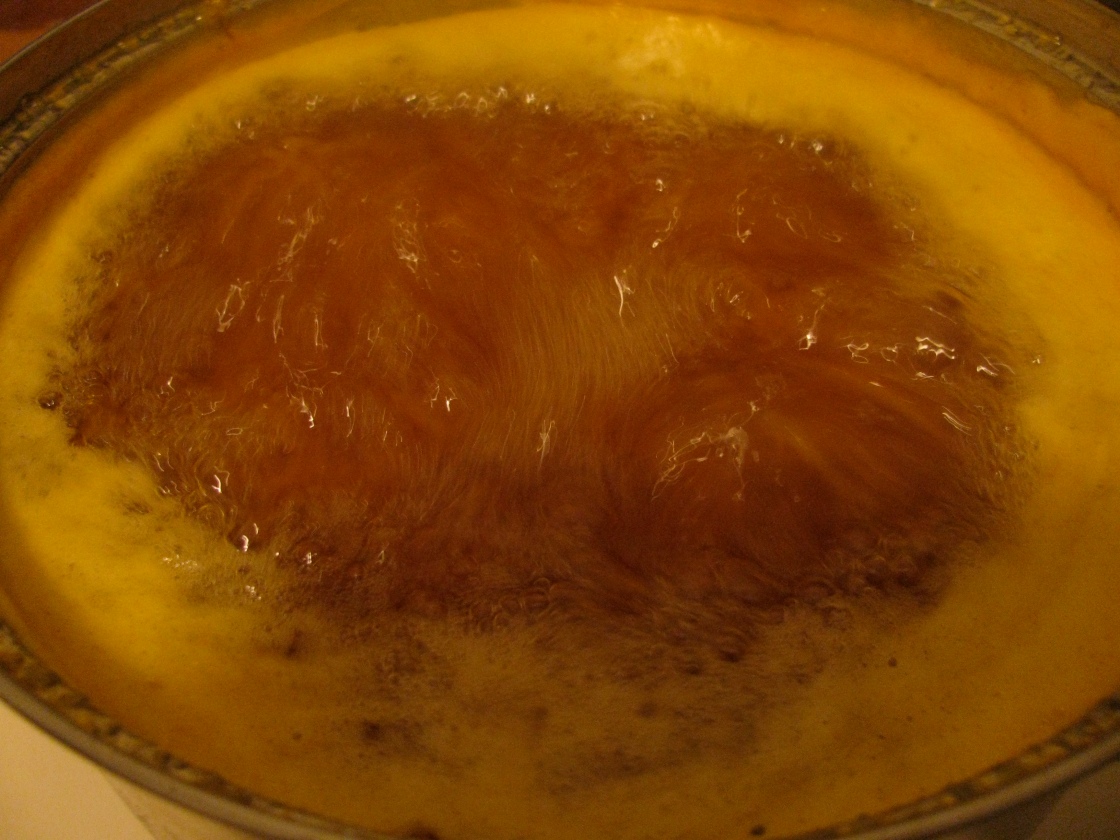 A good trick for busy mamas:

By the time it had finished cooking and was ready to jar, it was late, all I wanted to do was go to bed. And anyway I hadn’t made it to the hardware store to get the smaller jars. So I let it sit overnight (also gave me the opportunity to see how gelled it had really gotten) then the next day reheated it and poured into my sterilized jars.

Bad trick: letting it burn a teeny bit while reheating. It doesn’t really need to reach a boil. It sterilized last night, and if you covered it, should still be sterile, besides it’s packed with sugar, I doubt this stuff is capable of supporting mold. So don’t overdo it whilst simultaneously eating lunch, oblivious to stirring, as some people might have done. That said, the little bit of burny didn’t make a bad flavor at all.

So, now that you have jar upon jar of marmalade, dear girl, what do you intend to do with it?

For starters I’ve discovered I like marmalade way better than milder fruit jams. I was never a huge jam fan. It’s fun to make (quite easy to make too much, in fact) and I do enjoy stirring it into yogurt, and the occasional PB&J. But I’ve always found jam to be either too sweet or too bland. Wasn’t till I tried my homemade marmalade that I realized fruit you would eat out of hand just doesn’t have enough flavor to carry the sugar it takes to make jam as sweet as I want it to be. But take something like orange peels, add a ton of sugar and you get something with real gusto! Wowza. Zing-orama!

Saw on another blog in my marm research that one woman’s family called it Mama-lade, because she was the only one who would touch the stuff. I like that, and suspect it will be true in our household as well. It is a very unusual taste to an American taste bud. We do tend to scorn the bitter.

In addition to smearing it on homemade toasted wheat bread with butter, I think it’s going to rock for cooking with.

or starters, I followed Riana’s non-recipe for Moroccan Chocolate Tangerine Tart. I love how she cooks exactly like I do, and is therefore incapable of conveying a real recipe, because anyway you’d have to have on hand whatever weird concoction she pulls out of her freezer to substitute for whatever she doesn’t have on hand. It’s impossible to imitate truly resource based cooking.

I did her non-recipe justice by paying very little attention to any part of it, except the concept– bittersweet whole orange puree (I just used marmalade whizzed up in the food processor), thickened with egg, on a pastry crust, with chocolate on top. I made mine bars, cuz I don’t have even a pie dish here, let alone a tart dish. They are intriguing little numbers. Exotic. I added cinnamon to play up the Moroccan flavor, and vanilla. I wouldn’t say they’re my new fave, the bitterness of the marmalade is kind of overpowering in such quantity, but well worth making.

More than star attraction cooking, I’m thinking the marm will be a good ‘punch up the flavor by the spoonful’ addition to lots of yummie things. It’d go great in almost any dessert. How about marm replacing a few tablespoons of the sugar in a chocolate cake? Stirred into the filling of an apple pie? Marmalade ice cream? But savory things too often benefit from a little sweetness– spaghetti sauce? (I once knew a real slimeball who, after asking me if I was a dancer and reading my palm made me spaghetti by his grandmother’s “secret” recipe, which included a big spoonful of grape jelly… I was young.) How about stir fry? It’d be a fab glaze for any kind of meat or fish, I can hardly wait to try it on one of our lovingly brought from Cordova salmon fillets.

So many ideas, and plenty of marmalade to try them all! The neighbor just brought another bag of Satsumas, so I’ll be on to my fourth batch. I’ll figure this thing out yet!