***Today’s guest post is from Holli, who blogs at Scratch Treehouse. I requested this subject, since she had referred to her journey a few times in comments. I think most of us could use a little encouragement in the kids-eating-veggies department…. Thanks Holli!***

I was eight months pregnant with baby number two. Baby number one wasn’t yet two years old and I decided he better start taking a multivitamin. He had become a very picky eater subsisting on grains and dairy and potatoes (if you count French fries as potatoes). He’d eat apples and fruit, but never vegetables. I rationalized that he must be getting some vitamins from all the veggies I ate while he was breastfeeding. But, as baby number two got closer to arriving, I knew I could not keep this up.

One day, I struggled to keep him contained in a big Super Vitamin store, and I felt some defeat. Here I was buying vitamins in a bottle because I couldn’t get my son to eat them from food. And I thought, thankfully, they make vitamins for kids that taste like candy.

Almost one year later, baby number two was starting to eat solids. She still breast-fed, but loved solid food too. She was not content with just soft mashed up carrots and apples. She had to try everything on my plate. Sometimes that meant steamed veggies, sometimes meat and grains. She started to show a preference for meat, dairy and grains. Without much outside influence she started to push away the veggies. And she was barely one-years-old.

During that same time frame, I started to notice her being constipated. At her 9 month check up I had noticed it and mentioned it to the doctor who assured me this was just normal for starting solid foods. By her 12-month check up, I was worried. Pooping had become a long, painful struggle. My daughter would hold it in until she couldn’t any longer and cry while pooping. I was sure something was wrong.

Then came 9 months of specialists, laxatives, natural practitioners and we only got to the point of her pooping once a week. Finally, I consulted a Chinese Herbalist who told me point blank: eat vegetables. And, there were a few extra things like herbs, but I felt like someone had shaken me up. Within 2 weeks she had improved to pooping twice a week.

That first week I struggled: How in the world could I get her or her brother to eat vegetables? I remembered one visit with a Naturopathic team where one intern suggested I increase vegetables in my daughter’s diet. I kept a food journal for her, religiously recording every single thing she ate for 9 months. Everyone praised me on how well she was eating except that one intern. Turns out she was right. So, that is what changed me from believing kids won’t eat veggies to knowing they need them like they need to be potty trained.

I cried my first day on the vegetable crusade in our house. I knew I needed help, so I checked out books from the library on how to sneak vegetables into recipes so kids will eat them. I tried a few recipes, but something was nagging at me. I wondered, if I’m hiding the vegetables, will they every really learn to eat them? It just felt wrong.

I shared my struggle with a girl friend who is a Speech Pathologist (she helps kids under 3 learn to eat who have developmental difficulty speaking or eating). She suggested some things:

1) Introduce one food for a week or more

4) Don’t give up: try letting the kid feel it and watch you cook it, build curiosity

And so, I kept trying. My daughter was just over 2 years old when we started. She noticed the difference with pooping and started to understand that she needed veggies for good poops. Within a month she was eating a veggie serving at every meal. My son was more steadfast in his Picky Eater mindset. I knew he’d be harder to persuade since he’d grown up to that point not having to eat much of them.

I checked out some books from the library on vegetables so the kids would start to be curious about the different types. The ones that perked their interest the most were:

Eating the Alphabet: Fruits and Vegetables from A to Z by Lois Ehlert

The Vegetables We Eat by Gail Gibbons

I also adopted a spot on an elderly friend’s garden. I had heard that if you get kids in the garden where they can see things grow and help harvest, they’ll eat them too. Well, that certainly helped my daughter up her veggie intake, but my son was still a hard core Picky Eater.

Lucky for me I got the chance to try out the methods in a new book, “The No Cry Picky Eater Solution Book” by Elizabeth Pantly. I tried her suggestions before it was printed and slowly but surely, things began to change.

We got him to eat carrots, then broccoli. Just a few months ago, after a year and half of trying, he suddenly asked to try Peas. We all had some on our plate, and he only had his standard carrots. We have him a small portion, and he declared, “I LOVE them!” The funny thing is that I’d tried those as one of the first veggie for him to eat since they are sweet, but he forgot about his dislike. It’s been a long hard road, but I think it’s like anything else in parenting: we have to keep at it until they get it.

Since I’m using you all as a lifesaving device during this tight spot, I carry you with me throughout my day. It’s true. Sad, perhaps. Modern, for certain. The little virtual angels on my shoulder, encouraging me to take heart, go forth and do good things. Or lock myself in the bathroom and ball my eyes out, depending on the situation.

I kept my camera at hand yesterday, and thought I’d share with you some high points and low. 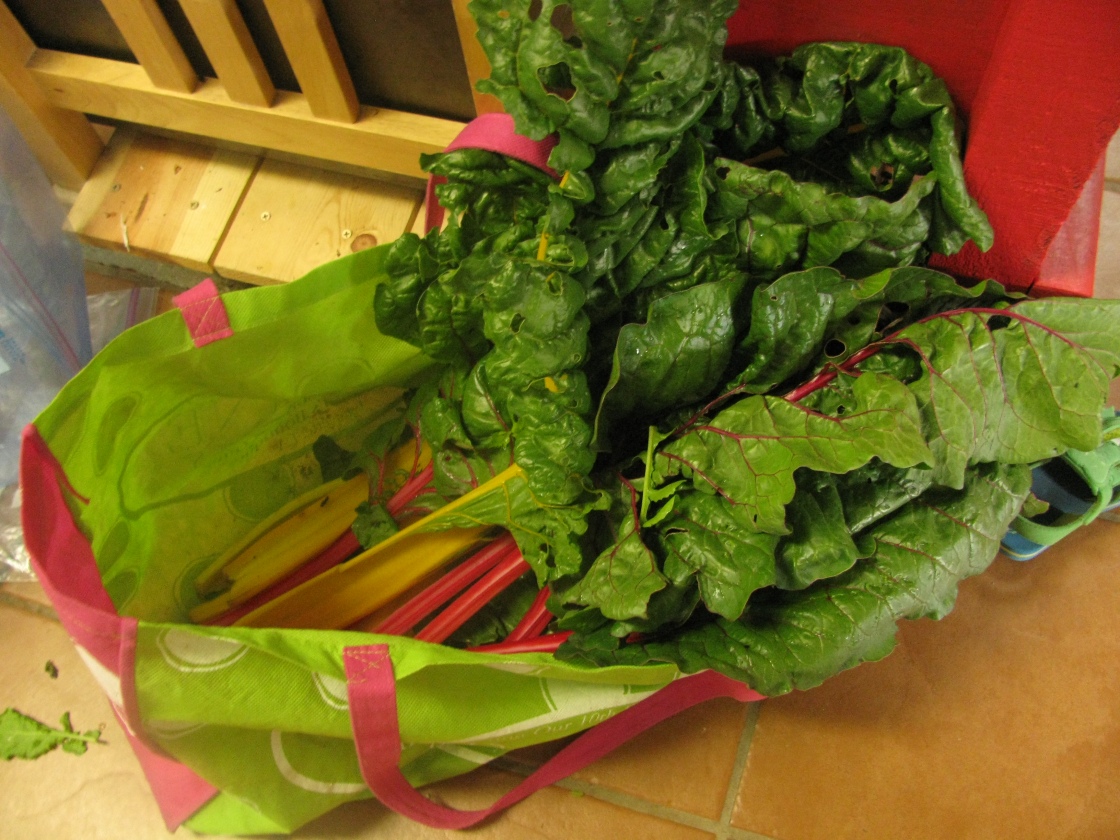 We had breakfast with a friend (thank you!) and then rode over to the community garden to water. It’s officially summer here. Hot. Time to water every other day. And the harvests are rolling in. More chard. Even with the trickiest muffin recipe ever, I still didn’t manage to use up all the stalks from the last bunch. Into the compost. Enter the new beauties.

The carrots are sizing up, just in the nick of time. I do so adore garden carrots– for taste, and even just for looking at. Gorgeous. 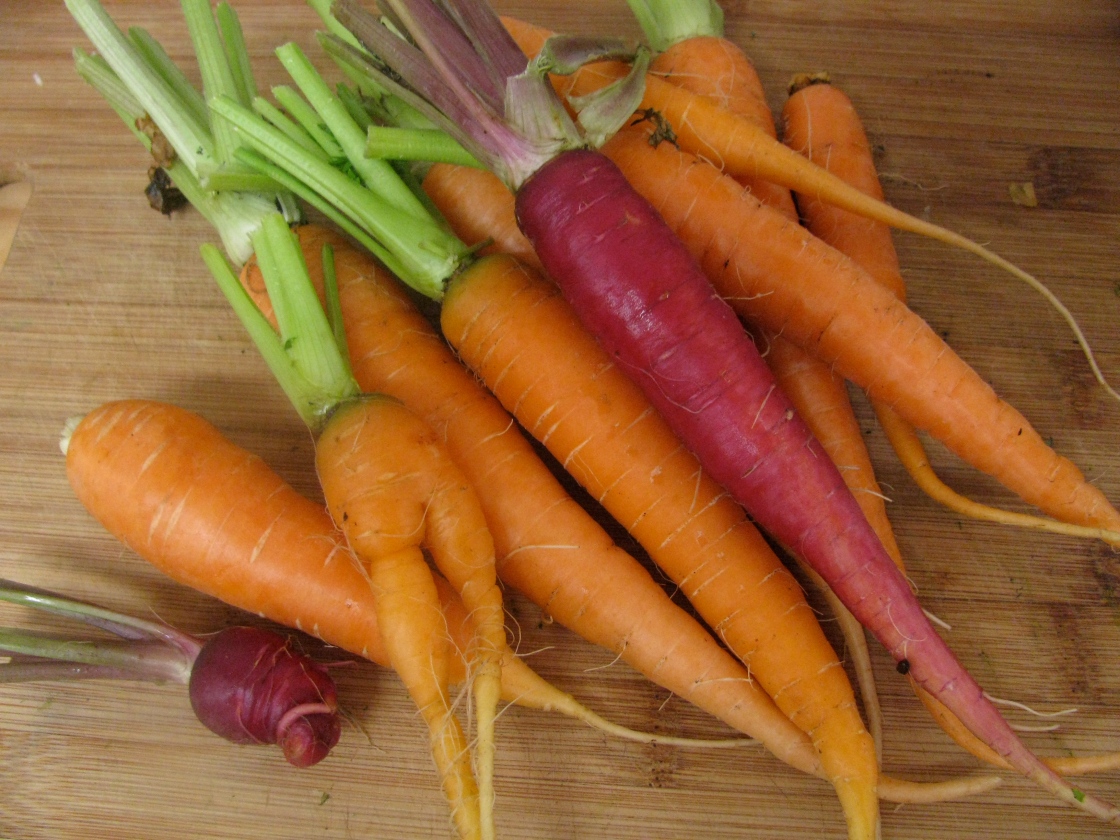 My garlic on the other hand is meeting the same sad fate my onions met last month. I don’t understand this. I planted both last fall, they grew fantastically all winter, thick as leeks some of them. I was counting my chickens, certain I would be getting huge bulbs. Then the onions started to die off. Sweet! I thought at first, the bulbs must be about ready. But no, nothing down there. I kept waiting, thinking maybe this was a normal part of the process. My local garden guru doesn’t do onions, so had no advice for me.

Soon they just flat out were rotting. I pulled what was left, peeled off the rotten layers and got some decent green onions at least. When the formerly verdant green garlic started to lose it’s luster, I didn’t wait so long. I gave them a little time, with a kernal of hope. Then I started pulling them. Same deal, dying and starting to rot from the outside in, but no bulbs.

Boo hoo! I am crushed! This time, I’m eatin’ those suckers before the rot really sets in.

Last week we were gone, so I didn’t get a chance to harvest salad greens, and of course this week it was just out of control.

Am I the only one who can’t get the salad greens thing figured out? It’s always feast or famine. Especially the lettuces. This mix has precious little lettuce in it, and hey, I like me some spice, but pure chicory and arugula makes for a burly salad. Especially when you’ve let the leaves get so big.

Here’s my tactic for large quantities of greens. Wash, drain, dump into a pillow case. Drain more into the tub, then go out in the yard and wing that MF like a helicopter. Then just store in the fridge as is. This lets some of that extra moisture wick out into the fridge’s dry air. When the pillow case starts to feel dry, in a day or two, put the lot into a garbage bag. Don’t forget that part, it won’t last long in the cloth before it starts to dry out too much.

I had to clean out my fridge to accommodate the new batch of garden lovelies. Time to get cookin! I made stir fried rice with carrots, garlic greens and chard stems for dinner. (That’s some beet and cabbage sauerkraut on the left there from last month’s big cabbage harvest. Gotta love that color, right?)

Of course, my day wasn’t all playing with vegetables. In fact, the 1YO who fell perfectly asleep in the bike trailer on the way home from the garden, didn’t transfer. He woke up when I tried to put him in his crib, and once he’s gotten more that 2 minutes of sleep he thinks he’s done napping.

It was a rough afternoon.

There were some sweetnesses– 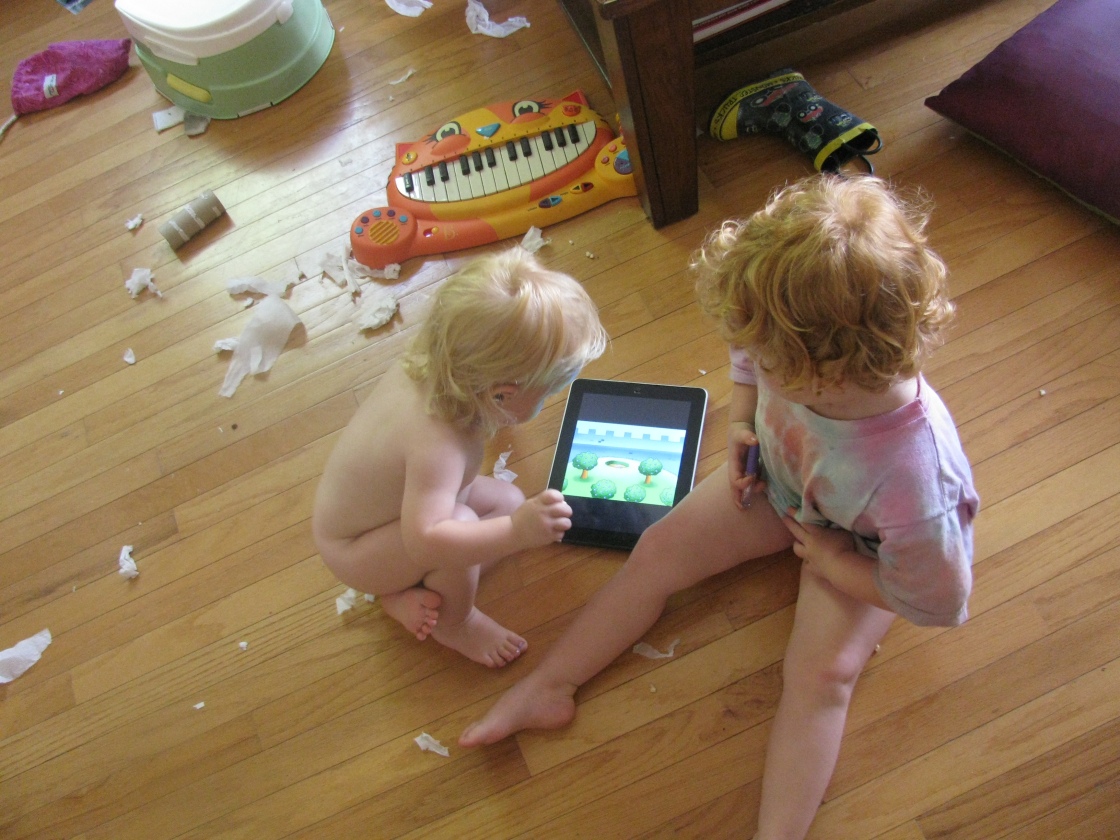 And plenty of messes, on every available surface–

Including (no picture here, you lucky devils) the 3YO peeing in a box of unpacked clothes, and subsequent cussing by yours truly. I tried to at least keep the F word out of it.

Fortunately, I made up a batch of mama treats last week. It’s good to have a few tricks up your sleeve. This easier-than-pie recipe stretches that expensive fair trade chocolate nicely. And doesn’t require a hot oven.

Gotta keep these in the fridge in this climate. I prefer a camo container, such as this Nancy’s yogurt tub. Keep your secret secret.