I’m back to work on my garden plot, and oh am I ever excited. Got the bed frame built today (and yesterday, thanks to a good Husband who took the wee ones for long walks, which is about all that makes the Babe happy these days). Now I just have to wait for the dirt. Which could be awhile. Bacon said two weeks (the non-profit in charge of all the community gardens is getting a giant soil donation), which could mean significantly longer…. boohoo.

I hate to be an ungrateful mother, I do love those little buggers like nothing else, but man oh man do I love working on a project without kids around! Having the time spread out before you, and a task at hand that you can actually concentrate on is sheer bliss. Bonus that the sun was shiny and warm through the nippy edge of the air. Sawdust, dirt and sunshine– is there anything better?

While I was blissing out on the memory of myself as someone who got shit done, the woman with the tidiest bed in the garden came to water it. She introduced herself and we chatted for quite a while. She’s really cool, a slightly older punky artist type. I liked her immediately, and we got right into it. She was surprised that I live so far (about a mile) and said, without malice, “I thought the garden was for people who live in the neighborhood, there’s a long waiting list…” I explained that there are no community gardens closer to me (if that is in fact an excuse, I don’t know) but had no explanation for why I had been floated to the top of the waiting list. Tenacity? Sheer force of will? Black magic? We talked about the ilk of your average community garden tenant, what a shame it is that people who aren’t using their plots are allowed to keep hold of them, and the prevalence of chemical use (I had been worried that my organic gardener self was about to be shocked out of it’s naivety by some bonafide bugs! But she gardens organically, and as I said, has the prettiest bed of all. Phew. It is possible).

So after all the discussion about available beds, and the trouble of building a new one, the one next to mine has just come available, and the coordinator says I’m welcome to it. He’s volunteer, and I know he gets quite disappointed and frustrated by how little people actually use their plots once they get one, let alone that they don’t help in the general upkeep of the communal space. I like to think he is impressed by how much work I’m doing. I have put in a lot of hours already, and I don’t even have dirt to put a seed in yet!

If I were in charge (notice I’m not stepping right up to volunteer), I’d first off make the plots about a quarter the size (they’re huge, my newly built one is 4×12, but the rest are 8×12 or bigger). I think a little plot, like 3×3 is perfect for most people. Enough to get their hands in the dirt, and grow a few heads of lettuce and a tomato plant. Most people have big ideas, but little time or desire to actually do the work. And that’s fine, they should still get the opportunity to get some dirt under their nails. But then any extra spaces could be divvied up between those who really work their plots. Of course, I myself feel that 4×12 is hardly enough…

Secondly, and more importantly, I’d mandate 5 hours of communal space weeding before anyone could get into their own dirt. That’d knock the top 90% off the waiting list!

Speaking of weeding, I followed my epic acetosa removal in November with layers of cardboard and leaves. Today I pulled back some cardboard, to dig a little hole for a corner post, and the dirt underneath was just rife with that wicked stuff, regrowing as thick as if I hadn’t spent so many hours on my hands and knees sifting those damn little corms out. Holy Shicksa Baby! That is downright creepy.

The first step for my new community garden bed is to clear the space of weeds. Fortunately, the spot had been covered with a good 6 or 8 inches of sawdust, otherwise, I’ve seen what weeds can do around here, Holy Crappers!

But still it was about half regrown with one of their most common and pernicious ground covering weeds here– acetosa. (Now you plant buffs out there will say, as I did, “hey! you can eat that!” And you can, tart and tender, delish. The garden coordinator looked at me like I’d just grown a third arm when I popped one in my mouth. But maybe that was because, as I was soon to discover, he sprays them with Round-up. Guess I won’t be making any acetosa salads)

The thing about pulling weeds is that it’s never a good idea. That top green portion is often completely harmless anyway, what you want to get out is what’s underneath, deep in the dark secret earth. If you really want to rid a new bed of some established weeds, you’ve got to dig deep under those spidery roots, then get down on your knees and gently sift them out. It’s a tedious and backbreaking job, and one best done without a 13 pound screaming baby strapped to your chest. FYI.

Bike to the garden with fussy Babe on front, Toddler in the trailer: 20 minutes.

Enter garden, set fussy Babe down in the shade to contemplate a leaf, dig three clumps of weeds: 10 minutes.

Soothe and walk to sleep Babe who has gone from fussy to full-fledged screaming: 15 minutes

Return to garden with Babe on back, dig weeds: 20 minutes

Stop to nurse Babe who has woken back up, and is escalating again: 10 minutes

Realize that, since we can never get out of the house till 10:30 AM, no matter how hard I try, it’s already 11:45 and soon to be lunchtime. Bag weeds, gather tools, and get toddler back into trailer, all with fussy Babe strapped on front: 15 minutes

Bike home, stopping to silently yet villainously curse the drivers who NEVER F-ING STOP FOR THE F-ING CROSSWALK: 20 minutes.

This totals out at almost two hours to get 30 minutes of weeding done. And that was with the Toddler being a perfectly adorable dirt playing angel!

Hubby is supposed to spell me some this weekend, even though he’s gearing up for finals. I’m hoping to get one full hour, solo, in the garden on both Saturday and Sunday. If it happens I should be able to finish the weeding, and get the post holes dug for the frame. We’ll see how that works out…

Then next weekend I’d be able to build the frame. Then another weekend to haul the dirt materials. Then–

Well, round about January, I should finally get to plant some seeds. I can hardly wait. 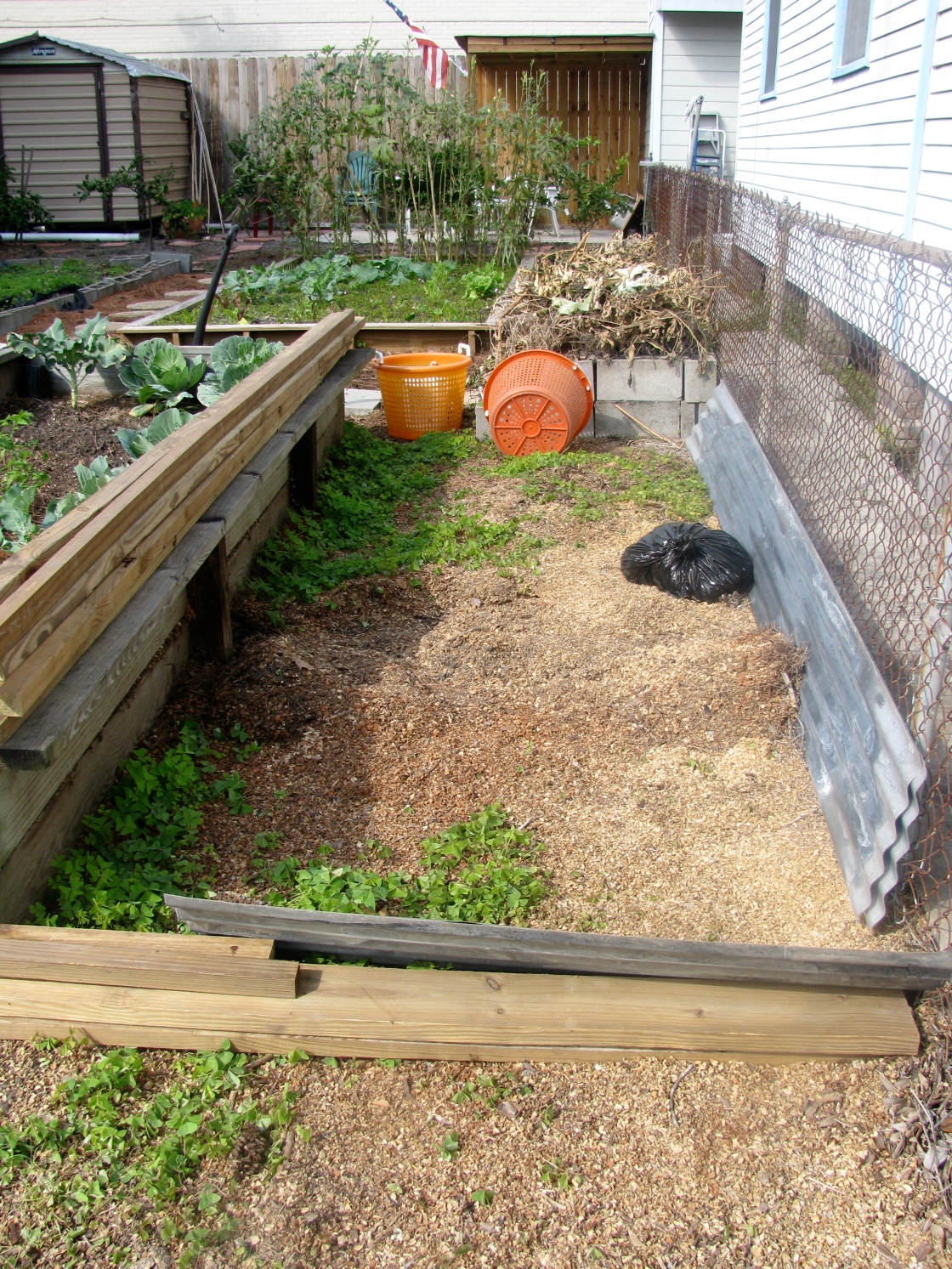 My future garden bed! It will be about 4ft x 12ft, with a path on the left between it and the neighboring bed. The roofing and boards are for building the frame. As you can see, I'm about half done with my weed work.