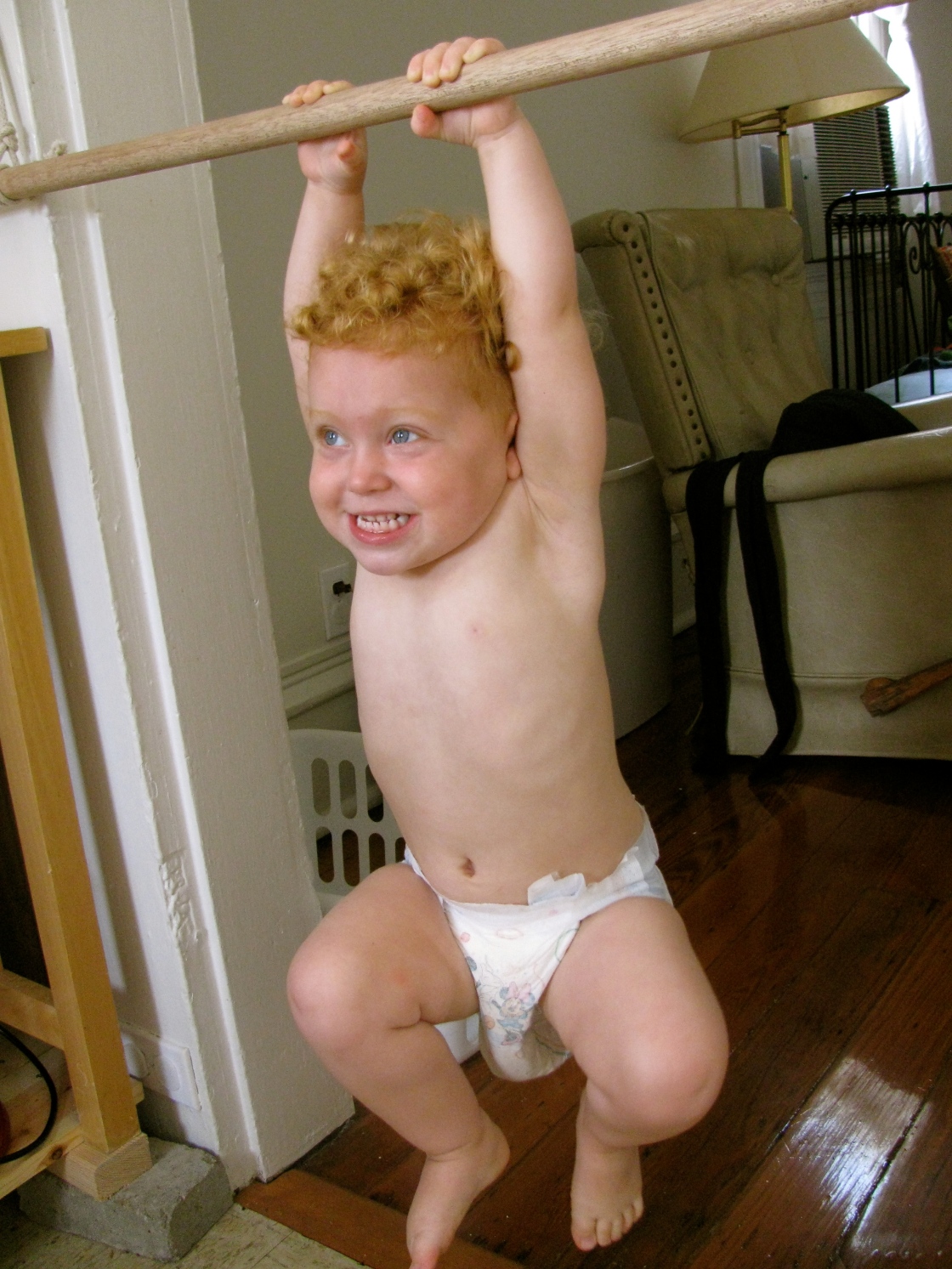 Just saw one of Riana’s old posts with a little video about kids and consumerism. Holy Crapola! I forget how extreme that all is, we lead such a sheltered life. I feel wicked enough setting the toddler down in front of a video once a day (ever since she stopped napping at 1 1/2!) I forget how much of America exposes their little kiddos to several hours a day of commercial laden TV. The toddler doesn’t know yet how bad off she is, with only a few baskets of toys, mostly second hand. She’ll figure it out though, TV or no TV. I grew up with hippie parents and all thrift stored clothes and toys, and it didn’t take very many years of school (even though it was an alternative school) to become mortally embarrassed by our lack. Sad but true. I did at least grow out of it, eventually.

We have a few baskets of little fidgety toys which mostly just get dumped on the floor and kicked around. And she has some larger toys that she seems to get more use out of– a plastic kitchen she plays with a lot, a little table and chairs (a real favorite, definitely worth the money and space), a rocking bear she never uses that I need to just get rid of, and a couple of riding plastic thingies. Oh, and some art supplies and leggos which she gets into now and then. But her favorite thing to play, hands down, is jump on the Big Bed with mama or, especially papa. She and papa can spend an hour on the bed, jumping, hiding under pillows, making a tent out of the sheet, or just pretending stuff. This seems to be her most fertile grounds for imaginary play, which she has just recently gotten way into. She has no qualms about size or relativity yet. Any item can be any other item. A pillow might be a boat, or a spoon. Once I put my fingers a certain way and said, look, it’s a giraffe (which it really in no way resembled), and ever since she asks one of us to “make a jaf” at least once a day.

Then there’s the things that weren’t meant to be toys. Tools are one of the toddlers faves. Especially the tape measure (although it would be the saw if I’d let her). I generally let her explore anything that’s not going to hurt her. In the kitchen I leave the bottom shelves for things that can’t get broken– tupperwares, mixing bowls, canned food. She really likes the cans, which she can stack like blocks. My yoga ball (never once used for yoga) had it’s day, when I was pregnant, and she needed to get out her rough-house energy. I’d sit on the couch, pinch it between my knees, and hold her hands while she jumped up and down on it, squealing.

I heard somewhere that the humble stick recently made it into the international museum of toys in New York. Ha! I hope they got sand, dirt, water and string in there too. Oh, maybe string is considered too dangerous for a toy nowadays.

Anyway, shortly after watching the kids and consumerism video, the toddler started trying to hang off the edge of the desk and then with a bright look in her eye said “I want to hang on my hangin bar!” The ‘hanging bar’ was an idea I had several months ago when she started trying to hang off of everything in sight, most of which was not made for hanging on. It’s just a sturdy dowel, hung with some rope from two screws on either side of the doorway to the kitchen (we just hang it up when she asks for it, ‘cuz, yes, it does block the doorway) This turned out to be one of my most brilliant mama manouvers ever, turning a problem behavior into a fun, healthy game, which also helps work out some extra energy.

This set me to thinking, let’s us mamas pool our brilliance. What toys do you find yer kiddos actually play with? What regular household items have been reborn as toys? What’s yer best yet mama manouver?